Temple Grandin: Seeing the world from another point of view

By Global Animal PartnershipAugust 5, 2016May 26th, 2021Archives
One Comment 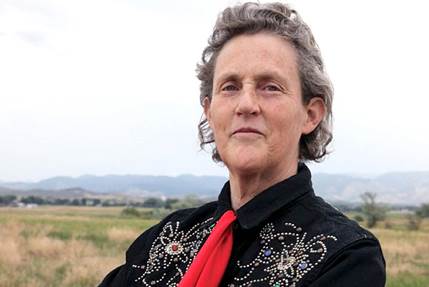 Dr. Temple Grandin began her journey towards improving animal welfare as a teenager while spending a summer on her Aunt’s cattle ranch. Grandin started to look at the world from an animal’s point of view – quite literally – by walking through her Aunt’s cattle handling facility and squeezing herself in the stock chute. Though not formally diagnosed until her forties, Temple’s autism allowed her a unique opportunity to understand animal behavior & emotion.

Grandin went on to use her exceptional insight into animal behavior to design corrals, alleyways, and chutes to help move cattle; these designs use an animal’s natural instincts to move through animal handling facilities in a calm, stress-free way.

Grandin’s work was first implemented in feedlots and slaughter plants, where many cattle are handled every day. She was later recruited by the North American Meat Institute (NAMI) to develop a welfare assessment for animals going to slaughter, and today, 95% of livestock are processed in plants using Grandin’s NAMI audit. Over the course of her career, Grandin’s achievements have extended far beyond the cattle industry. She has also been a key player in establishing low-stress handling techniques for pigs, sheep, horses, bison, deer, antelope, and poultry and is a spokesperson for autism awareness. She has written ten books on animals and autism and has authored on over 400 research articles. Grandin has also been honored in the media on numerous accounts, including being the subject of an HBO film and a TED talk speaker, making the TIME 100 list of most instrumental people, and appearing on The Today Show, Larry King Live, 48 Hours, 20/20, NPR, and the BBC.

So, on her 69th birthday, let’s celebrate Dr. Temple Grandin and all the work that she has done for both the autistic community and animal welfare. Hear, hear!

How can you tell the difference between sheep and goats?

How can you tell the difference between sheep and goats?