My childhood summers were spent on my grandparents’ farm. While my widowed mother attended summer courses to keep up her credits as a school teacher, I’d play with animals, explore the big grove of trees where all kinds of interesting birds and other animals, mushrooms, and plants lived, and while away the hours in grandpa’s huge barn. Every day, I’d go into the garden with my grandma to learn the name of this flower and how to tend to that vegetable, and plant and weed beside her. On special days, she’d butcher two chickens grandpa caught the night before in the chicken house. They just seemed to appear in a small cage outside the building we called the shanty. Grandma would boil water, chop off their heads, and then pluck their feathers in just a minute or two. It all seemed very normal—just what everyone did if you ate chicken.

When I was eight, my mother told me she was getting married and we were moving to a farm in Thornton, Iowa, where I could raise my own chickens. I suddenly became a full-time farm boy with chores, like gathering eggs twice a day from our flock of 300 hens, checking on the pigs who were out in the pasture, riding my bicycle to the field to make sure the water was working, and looking to see if there were new baby pigs. As I grew older, I got “promoted” to tractor driver, manual laborer, mechanic, and lots of other things that I found to be rather unpleasant and hard work—work that took me away from the animals.

As I left for college, I had every intention of never returning to the farm. Viet Nam came along, and I was fortunate to be accepted as a Peace Corps volunteer. Nigeria became my new home for 3 years. I served in the Ministry of Agriculture as the Young Farmers Club Organizer for the North East State, an area of 100,000 square miles. I had been back in United States about 4 years when Oscar Floy, my stepfather, called to see if I could come and help him harvest the crops, and I found myself back on the farm.

Shortly after harvest, he fell and broke his arm so I was back to put in the crop in the spring. I bought a sow with five piglets and started my pig business that I eventually grew to marketing about 3,000 outdoor, pastured pigs per year.

This went along until large confinement operations, CAFOs, began moving into Iowa. At the time, Iowa was competing with North Carolina to be the top confinement pig producing state. Seeing these industrial factories made me realize how far removed from farming their practices were. I knew then that I never wanted to produce” protein units” and, if that was the only alternative, I would not raise any pigs at all. The welfare of the animals matter—to them, to the consumer, and to me as a farmer.

Independent farmers started to get squeezed out of the market. It was too difficult to compete against the big confinement factories. So, I thought, why not look for a market for outdoor-raised, free-range pigs? After all, there were free-range chickens in the market.

I soon met Bill Niman and, in 1995, sold my first 30 pigs to the restaurant market in San Francisco. It was the first time I had ever sold pigs and knew where they were going. Niman Ranch Pork Company was later formed, and I’m proud to manage the network of more than 500 farmers raising around 150,000 pigs each year with high animal welfare and without antibiotics.

My time is divided amongst my responsibilities leading Niman Ranch Pork, raising pigs on my own 700-acre farm (600 pigs in 2010), meeting with the large number of visitors who come each year to see how we raise pigs outdoors, and, most recently, as a member of Global Animal Partnership’s Board of Directors. I also travel about twice each month, both nationally and internationally, whether it’s to work with distributors and chefs, meet with farmers, deliver speeches, or focus on policy and food issues surrounding sustainable animal agriculture.

When I first learned about Global Animal Partnership’s 5-Step Animal Welfare Rating Standards, I knew that since it’s a program that recognizes the importance of animal welfare and relays that information to consumers, it was going to be good for animals, food, and the environment. And, as a farmer myself, I appreciate how the different Steps allows a broad spectrum of farmers and ranchers to participate and, at the same time, incentivize us all to improve. The 5-Step program is also a powerful way for us to differentiate our higher welfare practices and set us apart from the commodity business.

I’ve seen farming change over the years with my own eyes, and I’m happy to say that it’s starting to embrace once again stewardship, responsible husbandry, and principles of sustainability that are so important to us all. 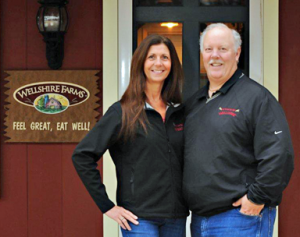