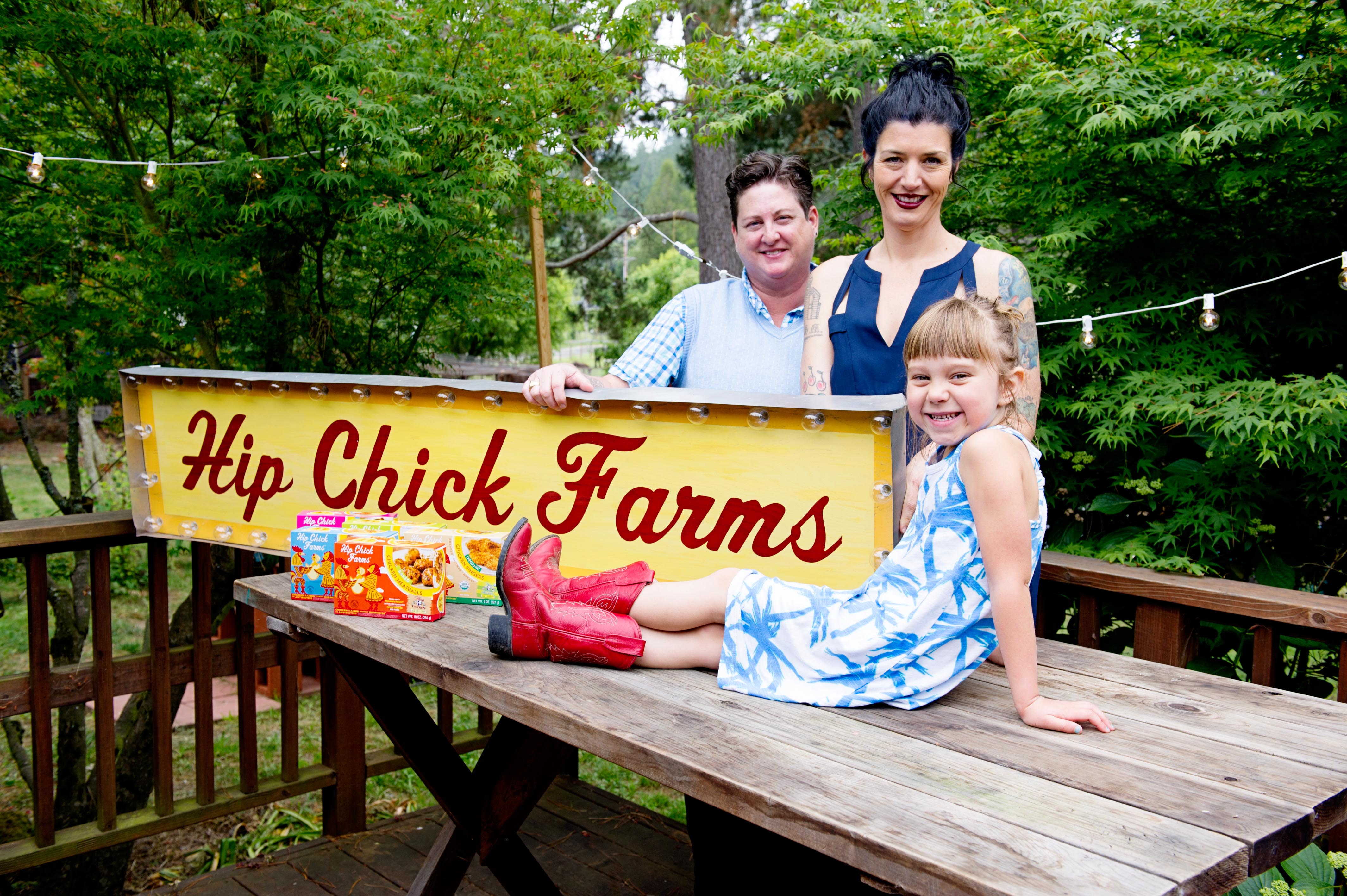 I recently had the wonderful pleasure of talking to one of the founders of Hip Chick Farms, Serafina Palandich. She shared not only her enthusiasm and passion for the greater good of the food industry but also many inspirational thoughts with us.

There are many different factors that came together perfectly to form this up and coming, socially responsible food company, Hip Chick Farms.  Serafina and her partner Jen founded the company after serious consideration about food, food sources, and the growing misunderstandings in the food world. Jen is a chef and has been working and creating culinary delights for many years. First with Alice Waters at Chez Panisse, where the idea of farm to table cooking began. The philosophies such as knowing where all the ingredients are sourced, the best seasons for each ingredient, and how to source locally and sustainably were close to her heart and resonate in her cooking. She continued to bring those philosophies through her next career moves including being the executive chef at a Montessori school and creating all the recipes for Hip Chick farms.

After sharing Jen’s half of the journey, Serafina shared hers: I grew up in LA. I didn’t realize the meat in hamburgers came from a cow and then I learned about what cow the meat came from and the process and I became a vegetarian. I didn’t want a part of that [eating meat] because I thought it was all bad. I was a vegetarian for 21 years before starting Hip Chicks. So its always been really important to know how the animals are raised, in what environment, and how they are processed – the whole thing from start to end.  Jen and I are both animal advocates and lovers.  We have a lot of rescues including two draft horses… in fact I’m not allowed on Craigslist anymore,” she said laughing. “Animal welfare is a passion… Animals raised right and in a natural environment is healthy; it’s healthier for the individual, the community, and the environment.  It is a long-term solution that we have gotten away from with all the mass production that we rely on now.“

When starting Hip Chick Farms, Jen and Serafina wanted to make sure their beliefs and their food philosophies really shined through. To start, they wanted to source responsibly and ensure they used the whole bird.- the breasts, drums, and legs.  Each part is used for a different product and recipe in their line of frozen goods.   The women ventured out to find their chicken source and found Mary’s Organic Chicken – which is a G.A.P. step rated farm and local to California.  They were excited to begin their partnership with Mary’s Organic Chicken because of the transparency and commitment to animal welfare that the Pitman Family has in raising their birds.  They also learned about Mary’s using the air-chill process after slaughter, which prevents pathogens on the chicken and is a better alternative for processing chickens. In addition, their slaughter process is carefully planned and expertly done to ensure less stress for the birds. All of the commitment and care that goes into the chickens and the processing fit with their commitment to better food.

“When we started, we sold into Whole Foods and we learned about G.A.P. and the step rated system.  But, step rated further processed labeling wasn’t available until just this past year so as soon as LPA came out we applied.  We are all about transparency.  We love the idea that the ingredients and our process is verified by a well-known and very reputable animal welfare group known for third party auditing.  It speaks to what we believe in for food.  I love what you guys are doing… I love to know and be educated on the various step levels and when I go to the store I can make an educated decision on what I want and what agrees with me.   It’s the transparency of it all.  I love working with G.A.P. because I believe in it,” Serafina explained. One of the inspirations for changing the food world is their daughter.  Jen and Serafina bought a farm in California so that they could teach their daughter about good and beautiful food.  They wanted their daughter to know where food comes from – how to raise animals and grow vegetables.

“There is a huge movement that is going toward responsible sourcing practices and educating yourself on the foods you eat.  The industry is changing.  There is a lot more consciousness about what we eat, what we buy and what stores we go to.  Knowing where your food comes from is important for everyone, but especially for parents.  In the smallest and simplest scale we can look at the notion that kids love chicken nuggets; but some are suspicious of what’s in it.  Knowing what goes into raising the chickens and where the ingredients are coming from can help settle the mind.Providing healthy meals for kids is a goal of ours and we think it could change a lot in the food system… It’s important that parents know what their kids are eating but it’s even more important, I think, to educate your kids.  The food you eat had a profound impact on the world and it can be as simple as chicken nugget,” she said. Jen and Serafina hope that as they grow, what they stand for – transparency, organic, no antibiotics, animal welfare certified – can grow with them and become the standard in the food world. Or if not the norm, at the very least , be heartily embraced and sought after on a larger scale so as to help move society into a new mindset on what they should invest their money in. We are all investors…what stores we go to and products we buy is an investment.”