Get to Know the Global Animal Partnership Farm Team

By Global Animal PartnershipJuly 2, 2018October 28th, 2019Audience: Everyone, Info for Farmers and Ranchers
No Comments

Have you ever wondered exactly who are the people on the G.A.P. Farm Team, creating the Global Animal Partnership standards that are adopted by thousands of farms across the globe? Keep reading to get an inside look at the G.A.P. Farm Team members’ backgrounds, expertise, and what they find to be the toughest challenges in leading the way for continuous improvement in farm animal welfare. 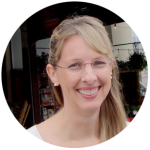 Frances holds a Bachelor’s degree in Zoology from the University of Leeds, a Master’s degree in Animal Behavior and Welfare from the University of Edinburgh, and her PhD in Animal Science from the University of British Columbia. While studying zoology, her interest in “why animals do what they do” intensified her passion for animal welfare and her desire to make large-scale impacts on animals’ lives. Her doctorate focused on detecting early lameness in dairy cows, but during her 10 years at G.A.P., her expertise has grown to include many more species, including beef cattle, pigs, poultry, bison, goats, laying hens, and sheep.

Her main duties are managing the team of farm animal welfare specialists, providing general G.A.P. program support for more than 3,500 farmers and ranchers, developing producer resources and templates, working with G.A.P.’s accredited certifier partners on certification, training and process checks, as well as developing and writing standards for the 5-Step® Program. 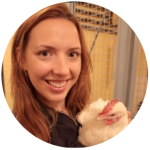 Krysta is the newest Farm Team member, but her experience in animal behavior and welfare packs a punch. Her childhood dreams of becoming a large animal vet influenced her decision to study animal biology at the University of Guelph in Canada. While there, she found her love for farm animal welfare science and shifted gears to continue her education in poultry, mainly chicken, behavior and welfare. Her Master’s and PhD degrees focused on hunger mechanisms of broiler breeders and hens, and how those can be influenced in order to reduce feather pecking and cannibalism behaviors.

Gabbi grew up as a ranch hand on her family’s farm in Michigan, where she developed her love for many species of farm animals, especially cattle and pigs, at an early age. Like Krysta, she was tempted to go to vet school like others in her family, but ultimately decided studying animal behavior and management suited her better than medicine, as she wanted to pursue ways to work in farm animal welfare. She earned her Bachelor’s degree in Animal Sciences from Michigan State University and Master’s degree in Animal Biology from UC Davis, where she developed, tested, and applied a comprehensive welfare assessment for conventional cow-calf operations. 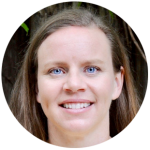 While studying Animal Science at Oregon State University, Kate became exposed to the specific discipline of Farm Animal Welfare and Behavior, which she ended up studying for her Master’s degree at the University of Edinburgh. She was particularly interested in how to bridge the gap between animal behavioral scientific evidence and practical application. Her specialty is in beef and dairy cattle, and she notes that working in farm animal welfare has been an unique experience in that usually what is good for the animal ends up being good for people and the environment, like in the case of pasture management and land use.

What is challenging for the G.A.P. Farm Team?

Crafting and revising top-notch farm animal welfare guidelines for eight unique species is no easy task, even with the years of combined expertise and education that this team has. Below, the Farm Team reveals some of its top challenges:

“When writing a standard that’s focused on promoting great animal welfare, you’ve got to consider all of the regional and country differences in how animals are raised. There are many, many different production systems out there and a lot of different terms used to describe the same thing. Farmers and ranchers aren’t the only ones who read the standards; we’ve got certifiers, auditors, retailers, scientists, manufacturers and consumers looking at them too, and that’s just the tip of the iceberg! I think we’ve learned a lot over the last 10 years on what works and what doesn’t, but I have a much greater appreciation for good writing skills these days!” – Frances Valentine
“I find it challenging to make sure the standards are written in a concise way that makes it very clear what we expect, closes loopholes, yet gives the freedom for a number of different agricultural solutions. Though this can be challenging, I think it’s a very important aspect and sets us apart from other animal welfare programs.” – Krysta Morrissey
“Finding a way to open up communication channels among producers, consumers, and animal advocates is often challenging. I think that assumptions are sometimes made about another stakeholder group’s intentions, but when we all come together, we often find that we have the same goals in mind, and that we’ve just been using different ways to say it.” – Gabbi Simon
“I think updating the beef standards has been challenging, even though I know a lot about the industry. Beef operations can vary widely, and operation practices can be based on the region they are in. You have to think about all the different types of operations and what all the challenges might be for them when writing the standards.” – Kate Davis-Hill

Want to take a deeper dive into how G.A.P. Standards are developed by the G.A.P. Farm team and our collaborators? Click here to learn more.