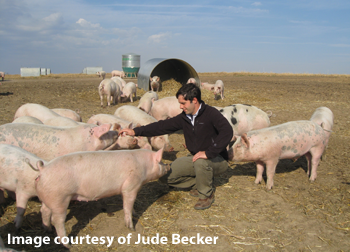 In the mid-80s, as a child, I saw first-hand the industrial paradigm finalize its domination over Iowa’s long history of farming. My own family’s tradition—my own legacy—of small-scale farming was no longer viable because simply raising animals with the best care and taking them to town couldn’t support our households and farm any more. We had no choice but to stop farming and lease the land to neighbors who were participating in the increasingly capital-intensive production model.

It wasn’t until I was in high school, when I learned about my family’s heritage from my grandmother, that I became inspired to find a way to continue our traditions of producing food for others. I realized I wanted to be a farmer like so many others in my family had been, which meant I needed to find a way to farm responsibly, ethically, and profitably without giving up any of the core values I hold dear.

I started farming in 1999 with six sows. Today, I raise 360 sows of Chester White, Landrace, and Yorkshire lineage on 400 acres of certified organic land that I’m proud to say produces about 25% of the feed my sows and their piglets enjoy each year. We’ve achieved Step 3 certification and I’m hoping to move towards a Step 4 rating and an even higher percentage of on-farm feed production.

Our steadfast belief that farming must be responsible and humane is, in fact, our farm’s goal and one of our founding principles: to maximize the morality of our process—to improve the health and wellness of our animals, our staff, and the environment we all share—and to practice good animal welfare.

Animal welfare has been on my mind since my earliest memories, but as I worked with pigs, became inspired by their unique demeanors and individual personalities, and read Rudolph Steiner, my actions became fully embedded in higher welfare farming principles. On a personal level, I’ve been rewarded by seeing the animals express their own instincts in natural environments, and professionally, our farm has seen improvements in the taste of the meat. It became clear that those of us who are omnivores can only stand to benefit from high farm animal welfare.

Despite challenges we may face and the long days we spend on the farm, I’ve not doubted my decision as a teenager to get back to raising pigs, and, when I learned about Global Animal Partnership and the 5-Step Animal Welfare Rating Standards program, I finally felt like I had a partner who got it. So many welfare programs exist that are just public relations campaigns, created to suit marketing needs of seemingly high welfare companies, but 5-Step is different and I finally feel like the playing field has been leveled.

I feel like my role isn’t only to raise animals with the most integrity I, as a farmer, can, and to provide them with the highest level of welfare I’m able, but to help communicate that meat truly is precious. It isn’t a cheap commodity—or, at least, it shouldn’t be, despite the prevalence of low-cost, low-welfare, commodity meat produced industrially and available readily. We need to eat less—but better—meat, which benefits us all, the land, our families, our communities, and the animals.

Every day, I stand in my pasture and see animals I know have been properly looked after, and I think to myself that this is humanity making food for us all. We can use our knowledge to care for the earth and ourselves in a correct way, in a way that benefits the animals, too. Each one of us has a moral choice. When I look out over the land and the animals, that scene I get to enjoy makes everything worthwhile.