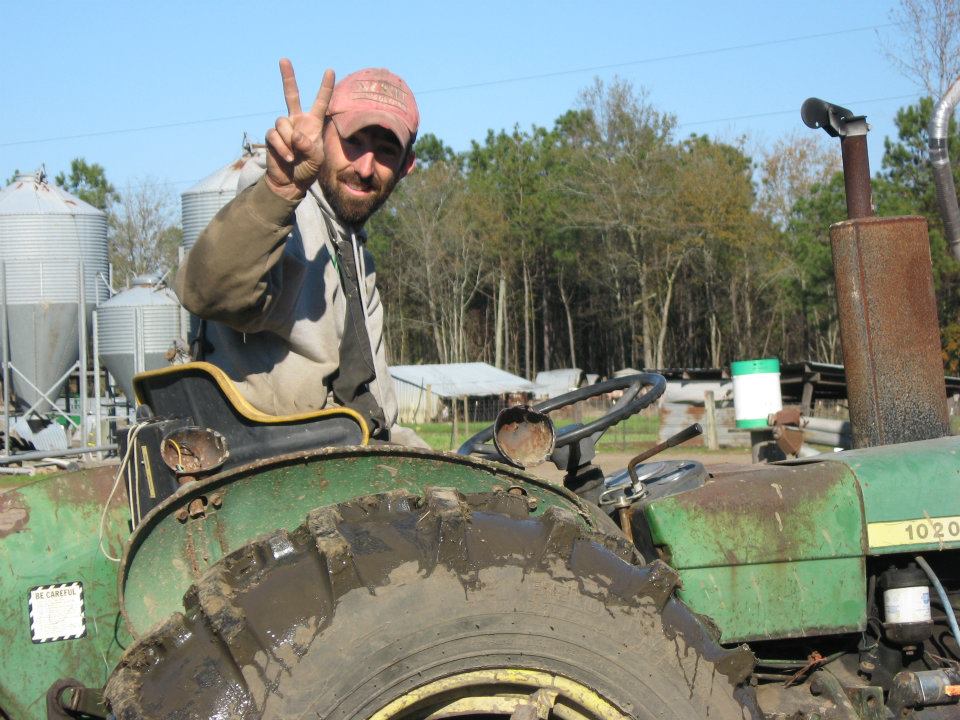 Jeremiah is the founder of North Carolina Natural Hog Growers Association (NCNHGA) and a valued Global Animal Partnership (G.A.P.) certified Step 4 hog farmer. Farming since he graduated college in 2001, Jeremiah has continuously grown as a farmer. He began farming grains, then expanded to include hogs, and eventually organized a group of farmers to form a hog production co-op based around truly humane raised pasture pork. “The co-op was born out of necessity,” Jeremiah says. Hog farming, with pasture raised hogs, was struggling in North Carolina and when a big producer that farmers would look to for support decided to pull out of the area, the outlook for hog farmers was grim.

That didn’t hinder Jeremiah however, “People called me a fool… but it was what I wanted to do and what I enjoy doing. I told those people that if I failed, then I could just go get a regular job and make a paycheck and pay off my decisions. I think people should be able to do what they love and get paid for it.” His love for what he does truly shines through and it has paid off. The NCNHGA has grown to include multiple farmers with the largest farms certified through G.A.P..

Jeremiah’s farm was one of the very first farms certified with G.A.P. during the pilot years. He attended the initial auditor training, gave input on the initial version of welfare standards for pork and continues to help today to improve the G.A.P. pork program.

But the Jones’ aren’t stopping there! Jeremiah takes pride in making all his own feed for the hogs using his knowledge of grains and his own processing facility. He no longer sells the grains; he strictly grows his crops in order to ensure the best quality feed for his hogs. In fact, the day of the interview, he was also learning how to use all new technology to test his grains. Producing and feeding non-GMO feed to the hogs is the next goal for him and NCNHGA farmers. This is a big project but the outcome will be worth it in the long run.

Jeremiah’s wife, Jessica, is essential to their success as well. She manages NCNHGA and keeps everything organized. Their two daughters, ages 4 and 5, have a natural love for the farm- helping Jeremiah on weekends to hand feed the sows and have taken a special interest in chickens. “They like to hold them and pet their feathers,” he said with a laugh.

With the Jones family sharing a love for their farm and NCNHGA, the prospect of becoming non-GMO, already selling to Whole Foods and providing multiple products to local farmers markets, the healthy, humane options for consumers just keep growing from Jeremiah and NCNHGA. We at G.A.P. are excited to see what they come up with next!